Easyjet and Ryanair are two of Europe’s biggest and most well-known budget airlines. Together they carry roughly 240 million passengers per year around the continent.

In this Easyjet vs Ryanair article we will compare the airlines head-to-head in terms of some operational statistics of interest. Most figures are taken directly from each airline’s 2019 annual report unless otherwise stated.

Easyjet (U2) was established in 1995 by founder Sir Stelios Haji-Ioannou. It is headquartered at London Luton Airport in the UK. Easyjet plc is listed on the London Stock Exchange (LSE: EZJ) and is part of the FTSE 100 index.

Easyjet made its inaugural flight from London Luton to Glasgow on 10 November 1995 using a Boeing 737 aircraft. Its first international route was London Luton to Amsterdam which started in 1996. 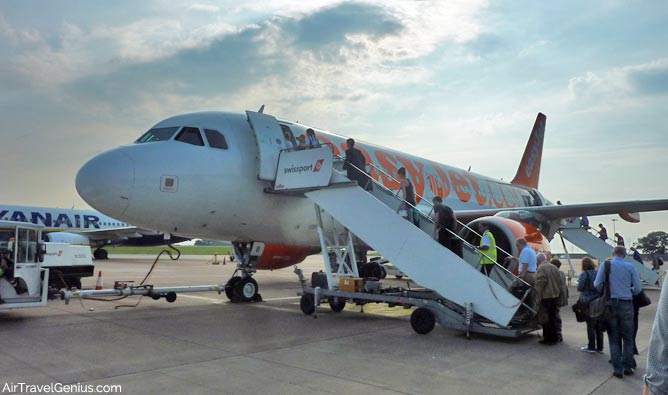 Ryanair (FR) was established in 1985 by the Ryan family. It is headquartered at Dublin Airport in Ireland. Ryanair Ltd is listed on the Irish Stock Exchange (ISEQ: RYA) plus additional listings in London (LSE: RYA) and in the US (NASDAQ:RYAAY). 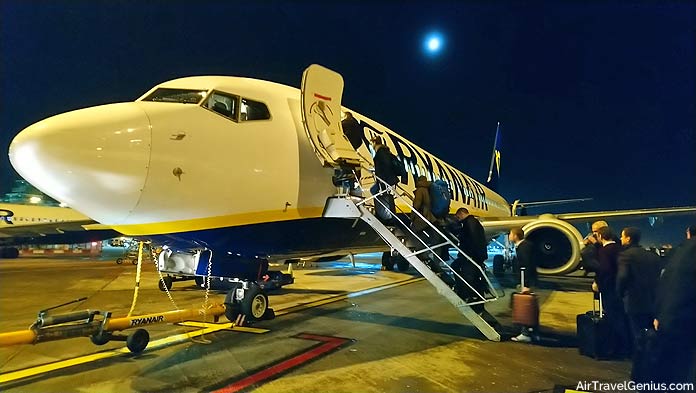 The Easyjet.com website had an average of 22 million monthly visits for the period Jul 2019 to Dec 2019. It is ranked number 10 in terms of traffic in the airline industry.

The Ryanair.com website had an average of 44 million monthly visits for the period Jul 2019 to Dec 2019. It is ranked number 1 in terms of traffic in the airline industry. [source: Similarweb]

The average sector length was 1,105km. This means the total distance flown annually by Easyjet aircraft is 670 million km, the equivalent of around 12 one-way trips between Earth and Mars*.

The average sector length was 1,246km. Likewise, the total distance flown annually by Ryanair aircraft is 984 million km, the equivalent of nearly 18 one-way trips between Earth and Mars* or roughly a one-way trip from Earth to Jupiter!

Now, whether one would want to make an interplanetary trip by no frills airline is another matter…

[*we assume the minimum possible distance between Earth and Mars of 55 million km.]

Easyjet currently flies 96.1 million passengers per year with an average load factor of 91.5%. That’s 263,000 passengers per day on average, although there will be more passengers flying during the peak summer season.

Ryanair reported a fleet of 455 Boeing 737 aircraft. It utilises its aircraft 9.0 hours per day. Ryanair has an order for up to 210 Boeing 737 MAX aircraft (135 firm + 75 options) – deliveries will be subject to safety reviews by aviation regulators.

The average Easyjet fare is €61.

The average Ryanair fare is €37. 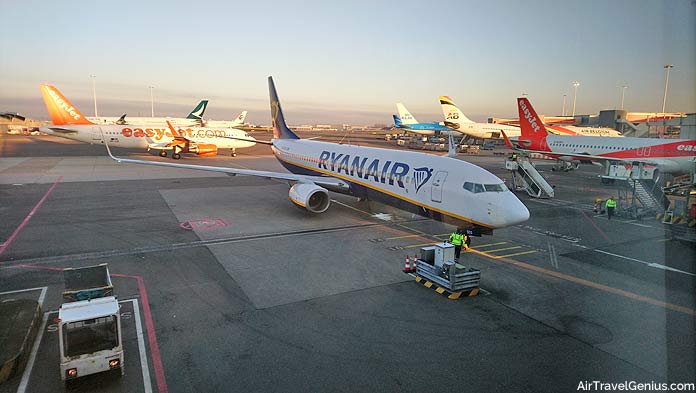 Easyjet planes have grey-orange seats in a 3-3 configuration. The seat pitch is 29″ and the seat width is 18″. Easyjet seats do not recline but do have a seat pocket. The Airbus A319 has 156 seats; the Airbus A320 has either 180 or 186 seats. All seats are economy class.

Easyjet sells allocated seating which costs between £3.99 and £23.99 per flight depending on the route and whether the seat is classed as extra legroom (first row or overwing exit), up front (rows 2-6) or elsewhere.

Ryanair planes have blue-yellow seats in a 3-3 configuration. The seat pitch is 30″ and the seat width is 17″. Ryanair seats do not recline and have no seat pocket. The Boeing 737-800 aircraft has 189 seats. All seats are economy class.

Ryanair also sells allocated seating which costs from €4 (standard seat), from €13 (front seats row 2-5) and from €14 (extra legroom seats on the exit rows) per flight depending on the route. Passengers who do not purchase allocated seating will automatically be assigned a ‘random’ seat at check-in.

Easyjet allows all passengers to bring 1 carry on bag (no weight limit) with maximum dimensions of 56 x 45 x 25cm including handles and wheels. An additional under seat bag (max dimensions 45 x 36 x 20cm) is only available for easyJet Plus cardholders, FLEXI fare, Up Front or Extra Legroom customers.

Ryanair allows all passengers to bring 1 small bag measuring up to 40x20x25cm which must be placed under the seat in front. Only those purchasing “Priority & 2 Cabin Bags”, Flexi Plus, Plus or Family Plus fares can take a second bag of up to 10kg and 55 x 40 x 20cm. This can be stowed in the overhead lockers.

Easyjet has over 15,000 staff members which includes 4,000 pilots and over 9,000 cabin crew. The Easyjet CEO is Johan Lundgren.

Easyjet reported a CO2 emission of 77g per passenger km.

Ryanair reported a CO2 emission of 66g per passenger km.

Easyjet’s longest route is Manchester (MAN) – Hurghada (HRG) in Egypt which is 2,578 miles and has a scheduled flying time of 5 hours 30 minutes.

Ryanair longest route is Warsaw Modlin (WMI) – Tenerife South (TFS) which is 2,542 miles and has a scheduled flying time of 5 hours 35 minutes.

Easyjet’s shortest route is Belfast (BFS) – Isle of Man (IOM) which is just 76 miles. The scheduled flying time is 45 minutes.

Both airlines have significant route coverage throughout Europe and also serve a few destinations in North Africa and Israel. Easyjet and Ryanair rarely compete on the same route. 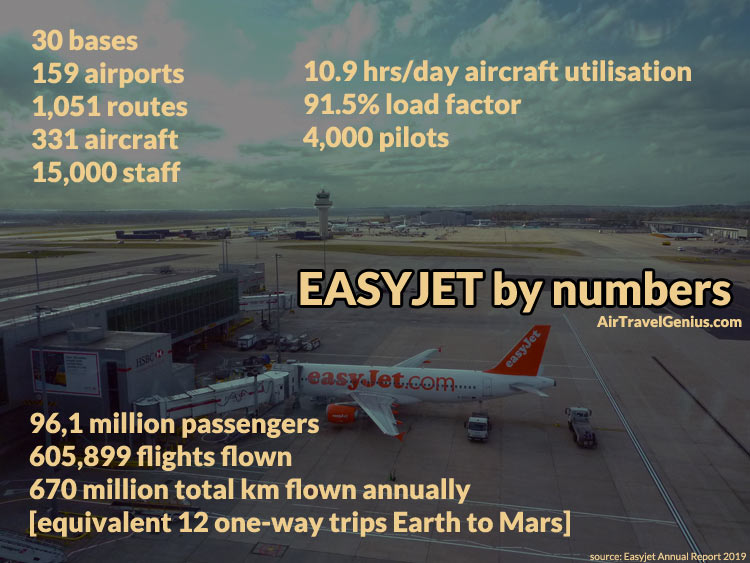 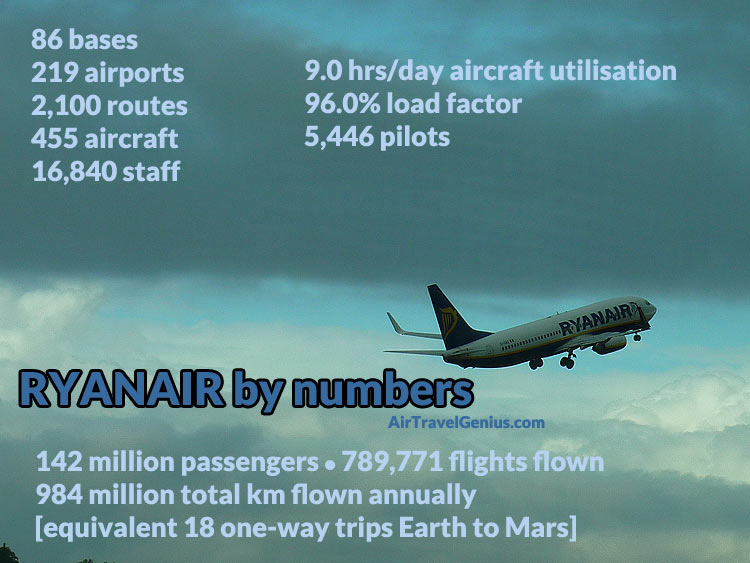 The figures show that Ryanair is statistically the bigger airline of the two and offers slightly lower fares than Easyjet and its competitors.

Whilst both airlines should continue to expand in the coming years there are uncertainties about the airline landscape following the UK’s Brexit decision to leave the European Union.

DISCLAIMER: Information can change; we try to provide accurate information though we are not liable for any inaccuracies.

21 Tips To Stay Healthy on Your Long-Haul Flight

Round The World Tickets – The Essential RTW Guide

How To Find Your Personal Flight History